Induction loops should be found in large group areas: railway and bus stations, airports, pharmacies, medical centres, hospitals, banks, cash desks, buses, museums, places of worship, schools and workplaces if conditions allow. We choose the instalation with the utmost care depending on conditions, the place of destination and the surface area of the induction loop. We design and install full systems and always take into consideration the previous aesthetic value of the location.
It is an unquestionable fact that the cultural values of a place with the induction loop installed improve unequivocally. That makes them friendly for people with hearing loss.
In this case ‘friendly” might indicate the difference between: to hear or not to hear.
In our offer you can find induction loop amplifiers suitable for using in busses, cash desks or conference rooms… or even in cinemas and theatres.
‘At this point I would like to wish You and myself as much moments spent in aformentioned places as possible. And if time doesn’t allow now, I hope that someday when you have plenty of it, the induction loop system will help you to get off at the right bus stop to fully experience a good film in a local cinema.’

Induction Loop – what it is and how it works

Induction loop is used to provide hearing assistance to hearing-aid users. It might help one particular individual or the whole group of people with that disability. The high functionality comes with relatively low cost of instalation and the fact that it is maintenance-free. Induction loop might be an optimal solution in wide range of situations. Especially, among people with sight disfunction – dominated by elderly people – hearing impairement is quite common.

Let’s imagine a situation when an individual with a sight defect must notice a deparure time of his bus or train from a distance. The induction loop is able to convey this type of message „directly to your ear” without any sound distortions and not only to one person but to everybody who is within the operating range of the system which is limited only by the walls of the building.
Nonetheless, the following information will be devoted to the hearing-impaired.

Do you know what your hearing aid can do?

More than half of the hearing aid users is not aware of the fact that their device is equipped with an element called „the inductor” which can be found in almost 100% of hearing aids. What is more, those who are aware of this fact, are not always able to use it in practice. The specialists are not eager to inform people what it can be used for, too. The factor that fails in this and many other cases is – KNOWLEDGE. People are not informed about the inductor which is the vital element of their hearing device.
The devices usually work in two modes:
M – „microphone” – which uses a built-in microphone that enables sound reception out of the environment. 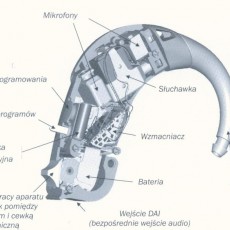 T – :”telecoil/telephone” – which enables to listen to the sound from the telephone handset with the microphone switched-off. What is important, it enables to use the inductor. The modes can be activated by choosing a proper switch on the hearing aid (M or T). There are also some hearing aids which offer a setting for simultaneous microphone and telecoil mode that doesn’t require manual intervention. In programmable devices it is also possible to set the desired ballance between the microphone and the inducer signals.
A huge advantage of „T” mode is the possibility to switch off the built-in microphone. That will eliminate most of background noise.

Induction loops from a physics point of view:
An induction loop system allows an audio signal to be transmitted to the listeners
by means of a magnetic field. It uses a moving magnet to induce an electric current in a nearby wire. This phenomenon is called – electromagnetic induction. A coil mounted in a hearing aid or other suitable receiver receives the magnetic field in the same way a transformer works, with the loop acting as the primary and the receiver’s coil as the secondary.

The amplifier drives a current into a loop  or series of loops. As the current flows through the cable it creates a Magnetic Field  in the required area. When the device is set to „T” it picks up the magnetic field signal, which is amplified into a high quality audio signal delivered directly to the ear of the hearing aid user. The type of the loop is not important. It is sufficient to connect a source of the acoustic signal (radio, microphone, mp3 player, a TV set or computer) to the loop controller.

General information about induction loop systems for the hearing impaired

The system is composed of:
– a loop amplifier plugged into the source of sound ( a microphone or a set of microphones connected to the audio mixer, a TV set, a computer etc.) The amplifier parameters are adjusted on the basis of the type of appliance, the character and the size of the room.
– A loop of wire, properly chosen and installed in accordance with IEC 60118-4:2015-06 which acts as an antenna that induces an electromagnetic field.
– the receiver (inductor), which is a hearing aid equipped with the induction loop receiver or the external induction loop receiver.

Types of loop systems in accordance to purpose

Induction loops used where people are gathered in a large audience, such as lecture or conference halls or places of worship.

Induction loops used in areas of initial customer contact, such as customer service desks, ticket offices, till areas or banks

Induction loops for special use, for example those paired with mobile phones.

Induction Loops – mechanism of action of the hearing-impaired support system

The signal from a sound source ( eg. a microphone or a set of microphones, a TV set, laptop, multimedia projector) is connected to the Induction Loop Amplifier which generates an alternating current of several amps. It runs through a closed circuit where an electromagnetic field is generated. The field is later transformed into a sound by the inductor in the hearing aid. The sound can be adjusted to the accurate level of hearing loss by an individual user.

In conference or lecture rooms – apart from sound sorces such as the lecturer’s microphone or laptop there is also a condenser microphone or a set of conndenser microphone signal added for the hearing aid user not to feel secluded. The microphones „gather” natural background noises from the room and the signal is transfered through the induction loop amplifier to the user’s hearing device.

The benefits of induction loop systems

– The user of a hearing aid with induction loop receiver can hear a crystal-clear sound directly from the lecturer’s microphone or another sound source. That enables to eliminate problems connected with unfavourable acoustics of the room.
– The number of users at the same time does not affect the quality of reception.
– The infinite number of people can use the induction loop simultaneously.
– The signal from properly installed induction loops is perfectly and individualy adjusted to the accurate level of hearing loss on the user’s device.
– Thanks to the induction loop a hearing impaired person doesn’t need to use any additional devices. The only thing necessary is to turn the „T” mode on.
– Contrary to appearances, the induction loop system for the hearing impaired is easy to use because it is set only once by a professional. After that, there is no need for further interference into the settings.

This website uses cookies to improve your experience while you navigate through the website. Out of these, the cookies that are categorized as necessary are stored on your browser as they are essential for the working of basic functionalities of the website. We also use third-party cookies that help us analyze and understand how you use this website. These cookies will be stored in your browser only with your consent. You also have the option to opt-out of these cookies. But opting out of some of these cookies may affect your browsing experience.
Necessary Always Enabled

Any cookies that may not be particularly necessary for the website to function and is used specifically to collect user personal data via analytics, ads, other embedded contents are termed as non-necessary cookies. It is mandatory to procure user consent prior to running these cookies on your website.